According to some critics the classical concert hall for decades has come to resemble a church or museum, a glass-case sanctuary for the ritualization of the yesterday’s revelations. According to composer, vocalist and songwriter, Gabriel Kahane, this is all a passing phase, an anomaly in the time-line of Western music, a “dark moment of the kind of High Modernism of the 1950s where the academy kind of strangled populism,” he explained to me by phone in January 2014. “If you take that aberration out of the narrative, there’s always been a connection between the vernacular and what’s in the concert hall.” 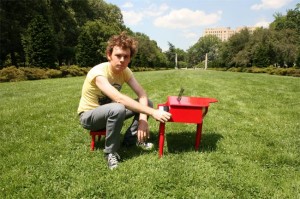 Connection is what Kahane is all about, with his broad association between genres, artists and styles. He is representative of a new breed of the classically-conversant who are jumping ship, taking advantage of breakthroughs in the categorical hull by earlier daring cross-over artists, and navigating entirely new vessels and routes. The son of concert pianist and Los Angeles Chamber Orchestra Music Director, Jeffrey Kahane, Gabriel’s mélange of projects have included orchestral and chamber compositions, pop songs and musical theater. A pianist, guitarist and banjo player, he gained a kind of cult status for his witty song-cycle, Craigslistlieder, which set actual texts from the eponymous classified ad web site. At the same time, his compositional prowess has earned him commissions from the Los Angeles Philharmonic and the Kronos Quartet. Last seen in Santa Barbara at Hahn Hall in 2011 with premier cellist Alisa Weilerstein, Kahane returned on February 4, 2014, courtesy of UCSB Arts & Lectures, to rock SOhO Music Club with like-minded chamber group, yMusic.

We spoke of Kahane’s signing on to Sony Masterworks, and his new release, “The Ambassador,” an album inspired by Los Angeles Architecture.