What Henry David Thoreau Taught Me About Respecting Mythology

There is a pass between the San Bernardino Mountains on the north and the San Jacinto Mountains to the south where Highway 10 connects Riverside with Palm Desert. In this nowhere zone rests the tiny town of Cabazon, gateway to the desert, and the site for some very peculiar giants. As my biology-savvy wife often reminds me, life tends to spawn in transition zones. But she didn’t have in mind dinosaurs.

Roadside attractions attract, so we pulled off when we saw a giant white Apatosaurus and a Tyrannosaurus Rex. What exactly were these concrete dinosaurs doing in Cabazon? Was this an old dig site? Were fossilized dinosaur tracks preserved in mud somewhere? Walking up to the Apatosaurus we quickly discovered it is actually hollow—a reptilian Trojan horse housing a gift shop. We climbed the stairwell leg, and found ourselves in the belly of a well-lit space, stocked with rubber dinosaur models, toy plastic weaponry, posters, puzzles and trinkets. It didn’t take very long, however, glancing at the wall displays, to figure out what was really going on: this roadside stop is not the product of science, but of theology. The Cabazon dinosaur park, dubbed The World’s Biggest Dinosaurs Museum, is a “young earth” propaganda post, a science-seeming zone for pressing travelers with opinions about creationism and a 6,000 year-old earth. END_OF_DOCUMENT_TOKEN_TO_BE_REPLACED

This week we air a lecture presented by Joseph Miller at the Institute of World Culture in Santa Barbara on May 31, 2014.

The Institute of World Culture was co-founded in Santa Barbara in 1976, the United States 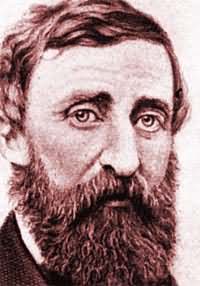 bicentennial year, by visionary philosopher Raghavan Iyer and his wife, Nandini, both professors at UC Santa Barbara at the time.

For nearly forty years the IWC has presented seminars, lectures, performances and study groups with the aim of promoting universal fellowship through understanding. “A world culture,” states its declaration, “is greater than the sum of its parts.”

This lecture is entitled, “Henry David Thoreau—Still in the Mail: Messages from the Imagination,” and centers on Thoreau’s first book, A Week on the Concord and Merrimack Rivers and his correspondence with Harrison Blake.