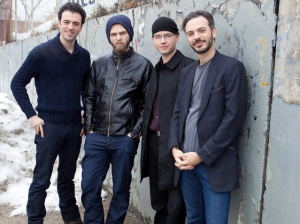 Sting quartet heaven — that’s what we are experiencing in Santa Barbara right now — with Julliard, Emerson and Brooklyn Rider all performing in a span of 3 weeks. But Brooklyn Rider–performing Thursday at Hahn Hall, courtesy of UCSB Arts & Lectures–is in the forefront this week on DirecTalk Radio, a special spoken word feature of THE CLASSICAL NOW. Starting at 7am, I will air my exclusive interview with COLIN JACOBSEN, violinist and composer with Brooklyn Rider. Jacobsen credits the poetry of Russian painter and art theorist Wassily Kandinsky, as well as the writing of David Byrne, as inspiration for his most recent composition. Rider is touring their new album, The Brooklyn Rider Almanac, which throws the compositional gauntlet to thirteen progressive musicians who have little to do with the traditional classical concert hall.

This interview originally aired on the January 19 episode of THE CLASSICAL NOW – 6am – 8am on 91.9 FM KCSB Santa Barbara. And streaming live at www.kcsb.org.